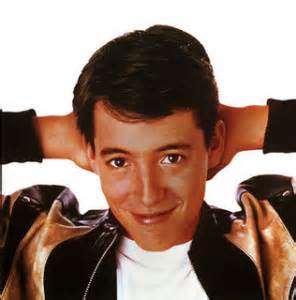 A wise man once said.

“Life moves pretty fast. If you don’t stop and look around once in a while… you could miss it.”

Of course that legendary philosopher is none other than the venerable Ferris Bueller– a prophetic visionary who spiced up everything he touched, converting the mundane into the magical.

Bueller squeezed every drop of whimsy from every moment and inspired people along the way.

Point being, in terms of role models, you could do worse. I mean even the dickheads like him.

So when Ferris tells you to stop and look around once in a while, you should listen. His point is that slow and steady may win the race, but the turtle certainly won’t enjoy the journey. And if you keep your head down and plug away, you may ultimately end up at a completely different destination than you intended.

Ferris wants more for you.

Unwilling to take life advice from a fictional character? How about a real life expert on squeezing the most out of what time we have left on this earth?

Bronnie Ware spent years as a hospice nurse working with the dying as they confronted their own mortality. She helped 100’s of people finish their journey, ministering to their needs during their final days. And while she reports that they all eventually came to terms with their pending demise, they also shared their deepest regrets.

Ware reports the following as the most common

“When people realize that their life is almost over and look back clearly on it, it is easy to see how many dreams have gone unfulfilled. Most people had not honored even a half of their dreams and had to die knowing that it was due to choices they had made. From the moment that you lose your health, it is too late. Health brings a freedom very few realize, until they no longer have it.”– The Five Regrets of the Dying

The most common regret—unfulfilled potential.

Does it sound like these people stopped dreaming long ago? Or decided their dreams just weren’t worth chasing? No, quite the contrary, faced with the end, they realize their folly. They simply got distracted, life got in the way and the next time they looked up they were terminal.

I have news for you. In terms of this world, WE ARE ALL TERMINAL.

Maybe you tried to live your dream early in life and after one small setback put things on hold, sure you’d return to it. Have you? Too many don’t, they sell out their dream for a corporate gig to meet a near term need then wake up 15 years later assistant to the regional manager– rocking a short sleeve dress shirt with yellow pits stains, a corner cubicle and the same coffee mug going on two decades.

It turns out Ferris may have been on to something.

The advice here isn’t to dump your family, quit your job and open a surf shop. But it is about starting small to re-engage your dreams and see about meeting your full potential. How that looks is up to you, but you must do something.

God made a unique you, and to not use those talents to glorify Him is a sin. And yes, I fully cop to living in a glass house on this one, but I am also working on my exit strategy.

Isn’t it time to start yours?

• What do you want to be when you grow up?
• If money were no object how would you fill you days?
• If you died today what would be left undone?

4 thoughts on “Regret, Death and Bueller”