My site is growing.  Slower than I’d like, but it is coming along.

Each time I post a new column to Ebeneez, I pick up some new followers. These are folks who found my column, presumably liked it, and want to receive an email when I put out a new post.  There is nothing more gratifying.  I am truly thankful for the interest.

That’s what makes this post especially hard to write.  You see last week I received the following 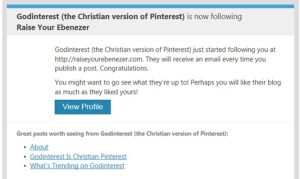 GodInterest is now following me.

My immediate response was thankfulness for a new follower, but almost immediately my newest follower got me to thinking.

Do we really need a Christian version of Pinterest?

Don’t get me wrong, I suspect the good people over at GodInterest have an awesome site and do some great stuff in the name of our Lord, but I thought the Christian version of Pinterest was well, Pinterest.

Is this yet another example of Christians inventing new ways to segregate themselves, subtlety alienating non-believers in the process?  Are we building a subculture to the detriment of the broader culture?   Fiddling while Rome burns around us?

A popular discussion among Evangelicals I know revolves around what it means to live out the biblical concept of being “in this world, but not of this world”.

John 15:19
If you belonged to the world, it would love you as its own. As it is, you do not belong to the world, but I have chosen you out of the world. That is why the world hates you

Romans 12:2
Do not conform to the pattern of this world, but be transformed by the renewing of your mind. Then you will be able to test and approve what God’s will is—his good, pleasing and perfect will.

1 John 2:15-17
Do not love the world or anything in the world. If anyone loves the world, love for the Father[a] is not in them.

The biblical mandate is clear, the real-world application a lot tougher.  Because of this, people are all over the continuum.

For some it means honesty, monogamy and a biblically consistent moral life.  Others see it as important to sit out R-rated movies or avoid alcohol.  For others, it means homeschooling their kids, avoiding media, ending longtime friendships, or a million other things.  Presumably to Westboro Baptist it means something entirely different.

The reason this all gets so sticky is the Great Commission.

The reason this is important is the same.

The fact is that “Go” and “Make” are action words and both are tough to do while driving past non-believers, racing home to post on GodTube.

How can we engage without compromise?

Clearly the answer is to participate, but keep the culture at an arm’s length.  This means different things to different folks.  Let’s hear what that means to you.  How long are your arms?

One thought on “Culture Wars: Engagement or Withdrawal?”