Genetics are nice, but optional.

But one factor rises above all others in determining athletic prowess.

I have seen it firsthand.  From the third grade girl with the wicked jump shot to the middle-school soccer player with the sick moves, the best players in youth sports have all been driven to excellence.

More interesting than the outcome however, is the source of that drive.  They didn’t get it from a parent that coaches,  better equipment or a spot on the select team.  They weren’t even born with it.  They earned it through struggle.

The best kids share a common trait.  They all have older siblings who also play.  It is the lone source of grit for kids these days and this alone has set them up to succeed.  You see at some point they were in a pickup game and realized that they had a choice.  Either quit, learn to play better, or continue to get your butt kicked daily.

Their failures + their struggles + their challenges =  their fuel

Have you ever heard Michael Jordan’s hall of fame induction speech?  It’s like none other.  Most of these Hall of Fame guys are all but finished with life.  They hobble up to the podium on induction day and recount all the great things that ever happened to them.  Broken and gray, they tear up about what used to be, they thank people and they leave. In short, they give a nice speech.

Michael has no time for nice, he’s still burning.

“I got two brothers – James and Larry –They gave me all I could ever ask for in terms of competition. My brother Larry dude fought me every single day. You guys sit there asking where is my competition or where did my competitive nature come from? It came from them. They started the fire in me.  And as I moved on in my career people added wood to that fire…”– Michael Jordan

He continues in the speech to recount every disappointment and every slight.  Three thousand six hundred and nine words about setbacks.  He names names.

From players who bested him, to GMs who doubted him, to opponents who questioned him, each is called out as a log.  Logs, lobbed onto a fire, fuel for his drive, building the inferno that is Michael Jordan. 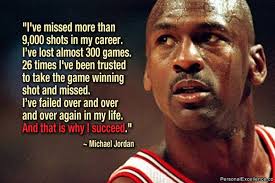 The bottom line is that successful people all have logs.  They are driven by past failures, competition and fear.  Despite this, we’ve built a society that shields our kids from all of this.  We have crafted a generation fueled by carseats, helmets, band-aids and bactine. Helicopter parents demand meetings with coaches about playing time, fighting all of their kid’s battles for them on the way toward countless participation trophies.

In the course of sheltering our kids from failure, we have stunted their drive and neutered their effort.  The results are exactly what you’d expect. Kids who never fail grow up to be adults who can’t compete.  It becomes easier to pick up a picket sign than a job application.  Blame and finger-pointing replace self-reflection and accountability.

So how do we get them back?  The advice is simple:  Let them fail.

The next time you see a life lesson coming your kid’s way stand down, don’t step in.  Have them try out for the travel team and let them feel the sting of getting cut.  The ensuing pit in their stomach is the same one someone allowed you to get once.  That pit will grow, it will fester and it will ultimately build them into a leader.