The emotion, the pageantry and the rivalries are like nothing else.  The bands, the unbridled enthusiasm, the fans, every part of it is just about perfect.

What makes it so unique is that unlike every other sport, in college football every game matters.  With a few notable exceptions, if you want to win it all you have to win them all.  There are no seven game series’ or rematches.  There is no tomorrow.

This puts college football fans on an emotional roller coaster each week as they attempt to will their team to victory.  And if that roller coaster sputters, you get the rawest of emotion.

Nothing is rawer than the surrender cobra.

You know the move.  It’s the one that frequently accompanies a Saturday gut-punch to your favorite team.   Hands on your head, prison stare into nothingness, empty eyes, gaping mouth and absolute and total despondency. 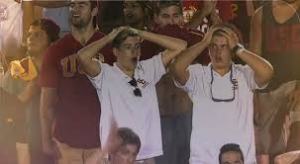 You see it after a missed field goal as time expires, when your team loses a rivalry game or <welp> when Christian McCaffrey eviscerates you in the Rose Bowl.

This year the surrender cobra is branching out from college football and into politics where collectively America has been in a perpetual surrender cobra stance for months.  Aside from total partisan hacks and ideologues, the electorate is wondering exactly what just happened to create a situation that is just as depressing as it is untenable.

And I’m not pompous enough to write a column telling you what to do about it.  But what I do find interesting is the rationalizations people are building around who they support and why, when clearly both candidates are deplorable.

“Sometimes you put your Christian values on pause to get the work done.”– Dr Ben Carson

Excuse me, what now?

Never have I heard such an asinine statement in all of my life. If that is what is required to make this country great again –count me out.   I hope this was an off-the-cuff remark and not indicative of Dr Carson’s true values, though let’s face it if he is shilling for Trump he may have none.

Regardless, at it’s face it is beyond ludicrous.  It reminds me of a popular meme making the rounds of what notable theologian CS Lewis had to say about this election  (though he wrote it in 1940)

Wow.  That’s about as prescient as it gets, from a guy who died the same day as JFK and likely never met either of these candidates.

Lewis said so eloquently what comes out slightly more succinctly as “the lessor of two evils is still evil.”

It was true in the 1940s and it is true today, no matter what justification you build to try and live with your choice.

What does this mean going forward?  I don’t know, but it tells me prayer, obedience, supplication and true surrender are required of all of us.  The surrender cobra itself is optional.